In Django Wexler’s The Forbidden Library, Alice loses her father in a shipwreck (I swear that’s not really a spoiler, it’s revealed almost immediately) and is taken in by the mysterious, and somewhat sinister, Lord Geryon. She is largely ignored and given the guidance that the library is forbidden (surprise!).

She, of course, sneaks into the library with an awesome new sidekick – Ashes, a talking cat. Soon after her entrance, Wexler starts to reveal the secrets of the library. There’s a dark and dangerous guardian. There’s a mysterious boy named Issac. There’s a secret villain working with Mr. Black. And most interestingly, there are Prison books. The Readers – Alica, Issac, Lord Geryon and others – have to enter the prison books and defeat the ‘inmates,’ after which they are able to control the inmates and call them to their will. For example, Alice enters a literal prison world and defeats a multitude of bouncy, blood-thirsty, bird-like creatures called the Swarm.  Once she defeats them, she is able to call the swarm into the real world and command them at her will. 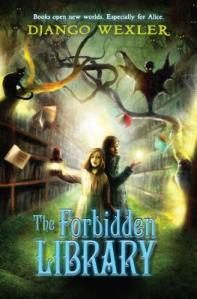 The idea of Prison books was rather unique and the Swarm, while frightening, was somehow quite endearing. This unique concept more than made up for the over-used fantasy concept of readers and magical books. In the end it was an exciting children’s read that really promotes a love of books.

One thought on “If Libraries Were Forbidden”