As Penguin Random House’s secret ARC at this year’s Book Expo I expected big things from Rosaria Munda’s Fireborne. The basic story is Atreus, aka the First Protector, starts a revolution to overthrow the Dragonlords and build a better world. Barring the dragons, it’s a very realistic story of serfs rising up against an unjust class system and a new regime struggling to deliver on the promises that it made. 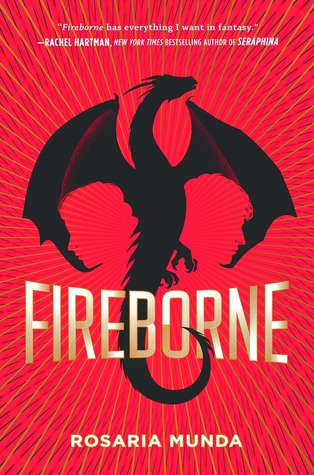 So I know that may make it sound like this could be a boring historical, but I think the story is wonderfully complex in the issues it touches on from whitewashing history to challenging biases to questioning what sort of world is worth building. Layered on top of that we see main characters Annie and Lee, and a contingent of friends, participating in exciting dragon riding competitions.

While the story was somewhat predictable, I think Munda made character choices that helped this book stand out from similar stories. While becoming Firstrider (i.e. winning the competition) was important to the characters, they were generally supportive of one another and the important part was not in winning, but in learning how to fill their new rules as leaders in this society. And Annie and Lee could have easily developed into another pair of angst filled, star crossed lovers, but the focus remained on how they supported one another. I think the lack of standard (needless) teen drama made this story a refreshing breath of fresh air.

The only thing I think was missing is that I really enjoyed the secondary characters – Power, Duck, Crissa and Cor – so I’d love to see more development of their stories. Maybe something for book two?